As a person with a Norwegian passport I need to have a visa to live legally in Egypt. Legel, shmegal, WHATEVER…. Egypt doesn’t have any laws so everything is officially legal! If I didn’t own an apartment I promise you with hand on my heart I would do exactly like all the other foreigners here.. Say ‘Screw you’ to visas. But as the months have passed and I have tried to get internet, phone  lines, cable tv, pay electricity bills not in my name, I have come to the conclusion that is of utmost importance that I get a visa and live here legally. In Egypt you buy a visa at the airport upon arrival, which is 15 dollars. This lasts for 2 weeks and then you have to get an official visa stating the reason for being incredibly stupid and deciding to stay in Egypt for more than 2 weeks! What most people do and what I have done is just stay as long as you want on the tourist visa and pay a small fine when leaving the country at the airport. No there is no police officer that hunts you down when the 2 weeks are up and takes you to the airport and puts you on the first Egyptair flight out of this country! 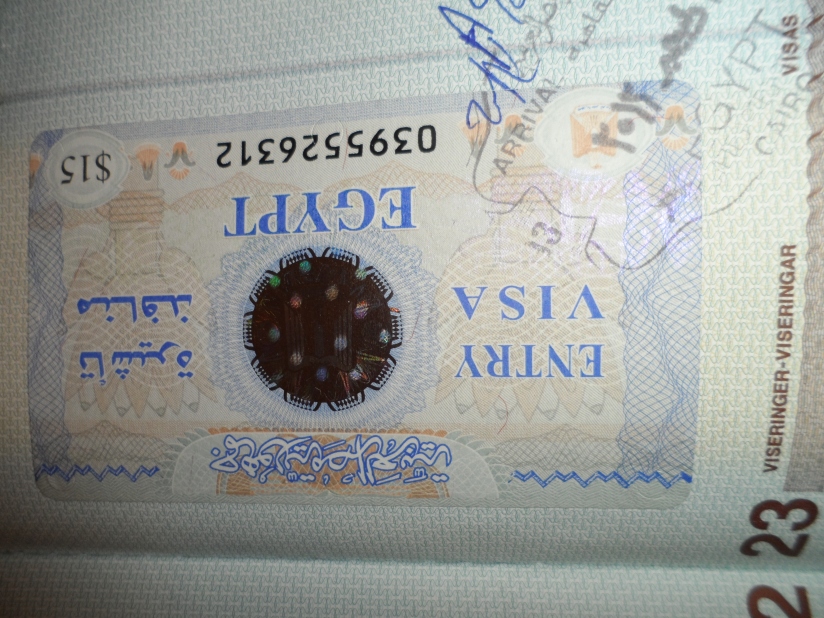 So the reason for me getting a visa is that I need to change the name of the apartment official in government papers to mine… So in order to do this I need a visa.. So I wanted to make it EASY and apply for a residence visa that lasts either 5 or 9 years. Would be a super idea right, since I am going to live here and don’t want to apply for a visa every time I pay my phone bill! Then with this visa I could change the name of the apartment and fix all the other small stuff like phone line and electricity. But this is Egypt, and that would be WAAAAAY to easy, and life is not easy! In order for me to get a residence visa I need to be married to an egyptian, have an egyptian child or own a property…. GREAT, I own a property… Ummm no, you need a visa to buy a property… Okey so ive got a tourist visa from the airport… NO, you need a proper visa.. So a residence visa? Yeah but you can’t get that unless you own a property… BUT I DO.. yeah but it’s not in your name officially yet until you get a visa… AAAAAHHHHHHHHH its one big stupid circle… So I thought id just get a student visa instead from the academy ill be studying in, but I can’t buy a property with a student visa, and I can’t just come to Egypt to study ANYTHING… I can come to Egypt and study something proper like Egyptology in an expensive university… But Fashion?! HAHAHA who comes to Egypt to study fashion at an Italian Fashion Academy. So I was not allowed to apply for a student visa, even though the truth is I will study… So the visa I had to get was a tourist visa. The tourist visa lasts for 3 months… Great… So 4 times a year I have to renew my visa for the REST OF MY LIFE!!!!!! But the visa guy felt sorry for me so he made it 2*3 months… As a secret between him and my boyfriend they wrote 6 months tourist visa… Secret!? Umm everyone can see it, but whatever as long as it makes my visa last longer!

Back to Mogamma (picture of building below). This is the name of the super large monstrosity of a building located exactly in the middle of Tahrir. I checked on Wikipedia and apparently more than 18000 people work there… YES 18 THOUSAND! In one building! But after going inside this building I promise you that maybe 1/4 of those people work and the other are just there to take up space, make the air stuffier, drink tea and talk about their weekend.  It was probably the worst experience of my life, and that is not exaggerating. It was DISGUSTING, with capital letters and HUGE exclamation marks.
I have a phobia of bad hygiene, smelly people, people interfering with my personal space and bad manners. It is as the door downstairs removes all good manners in people, and as soon as you walk up those Mogamma stairs you become a wild beast of an animal. 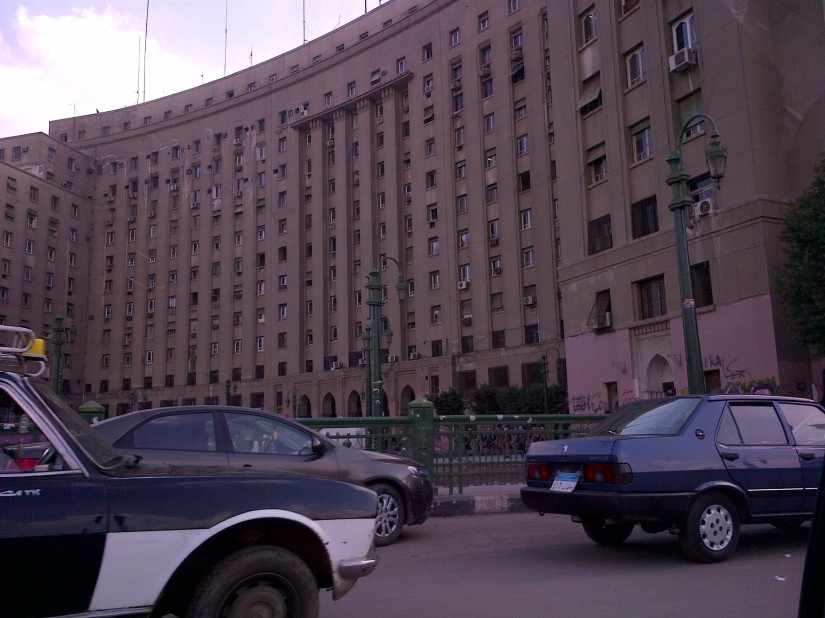 It is crowded…. Imagine the most crowded situation you have been in, now times that with FOUR…. No room for personal space in this building… You have people’s hair brushing your nose, people breathing down your neck… You will be able to smell what each person had for breakfast, and if they brush their teeth. When you enter this building you cant help but think how does it not collapse with all these people inside… You instantly become a human sandwich, all that changes when you move is the type of bread you are squashed between!

As in most cases in Egypt its always good to know someone important, and Thank God this was a situation my boyfriend knew someone. Well I say knew, he knew someone important in the police, who knew someone high up in immigration, he knew someone working on the immigration floor of the Mogamma, who knew the guy standing behind the visa counter. If I would have come alone to this building not knowing anyone I would have turned around after entering the front door. There are no signs ANYWHERE. You ask some random person.. where is visa? Bisa, what is, u want coke?… NOBODY knows anything… You just have to ask and ask and ask and hope that by chance one person tells you the correct way.

When we arrived on the immigration floor, we asked where is the visa desk… A guy told us at the end of the left corridor. When we got to the end, we couldn’t find anything. We asked someone there and he told us when you enter go to the end of the right corridor… so we went back… then we entered a visa area with a long corridor full of glass stalls with numbers on and HUNDREDS (I’m not kidding!!!) of smelly people. I don’t consider myself any better than anyone else because I have a different passport or because I have money, or because my family can support me, I know I am extremely lucky… BUT it wouldn’t hurt for the Mogamma to realise than refugees that don’t have passports should not be in the same area/queues as European citizens coming to Egypt for a long-term holiday. No sane foreigner would walk into this area and think, yes I would love to stay in this country… People are treated like animals here… I saw very few foreigners but all of them had a desperate look in their eyes as though they had just seen a ghost and were sweating in a temperature of 15 degrees! 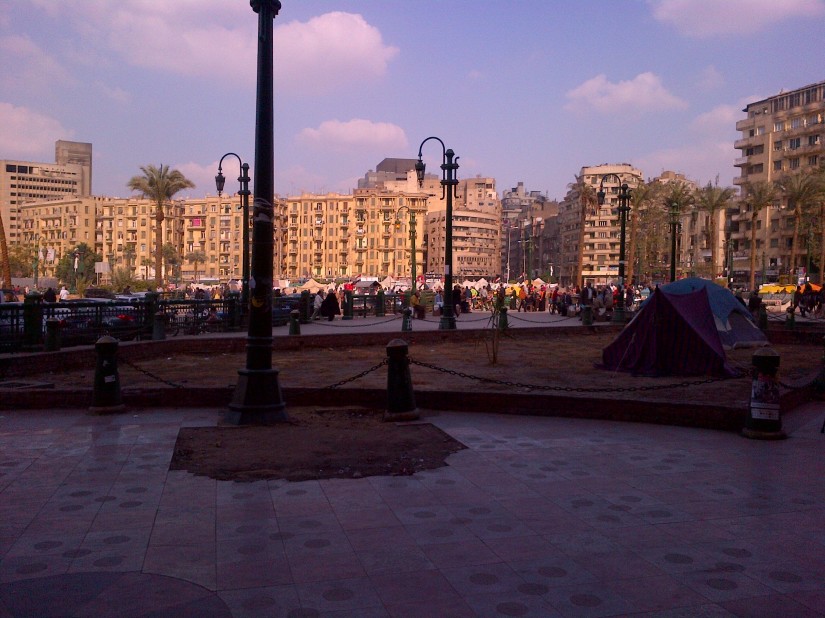 I have a personal hygiene level that 90% of the people who were there did not have…. Having to then squeeze through a huge group of smelly, sweaty, bad breath people is not my cup of tea! I have panic attacks if I wake up and my hair is greasy.. I use a bottle of disinfectant a week… these people havent taken showers for weeks… I even took showers in freezing water when I lived in the previous empty apartment! Anyways the place where we had to go was at the end of the visa corridor where hundreds of refugees were screaming and shouting for visas and passports. Mogamma is a place with disgusting behaviour… People have no manners in this building..

So what happens when you go to Mogamma to get a visa:You go to Mr.X and tell him you need a visa application. He gives you a piece of paper that you have to fill out. If you come late he will tell you that he doesn’t have any more applications and you have to come back tomorrow. After filling out the paper you get in line in one of the glass stalls along the corridor. Wait in line until the woman behind the stall tells you that you most likely are missing something (photo, copy of passport) or you filled something out wrong. You then have to fix this and get in the line again. Then she tells you come back in 2 hours and you will get your visa. Simple right? Well I only know this information from observing the people while in Mogamma. This is not written ANYWHERE, and nobody really knows what the steps are but you eventually find out when people send you there and here and over there and back here again…. People are link ping pong balls in the visa corridor, being send back and forth. It shouldnt take long but I saw the same people in the queues both days…

This was my process: I sat down on a bench while my boyfriend did all the work! Egyptians are gentlemen! So he called the guy who knew someone, who knew someone, who knew someone who worked there…. He talked to Mr. X behind the visa desk. He OFFICIALLY wasnt allowed to give out anymore visa application for the day, but gave us one anyways. A guy who had been there since 7 am was shouting uncontrollably because he had been sent to all these different places and when he finally got to the right place they told him they didn’t have anymore applications and he had to come back tomorrow. We filled out the application and gave it back to Mr.X. Then he showed us to a counter that was a ‘secret’ and they told us to get a copy of my last airport visa and a passport photo. We did this and she told us come back tomorrow and the visa will be done. The next day we went directly to Mr. X who took my boyfriend inside the glass stalls and told them to fix my passport right away, before the other 70 people waiting in the queue. After about an hour I was sent through the crowd of desperate people to pick up my passport behind the glass stall… I had to push through masses of people who had been waiting for hours and hours to get their visa… while I was pushing through saying excuse me im going inside the office, one women gives the shittiest look you can imagine and says ‘oooh arent you lucky, what makes you so special’…. That made me feel real good, thanks random woman, but I have a super amazing boyfriend, who knows someone, who knows someone! Go find your own super powers and dont hate on mine! 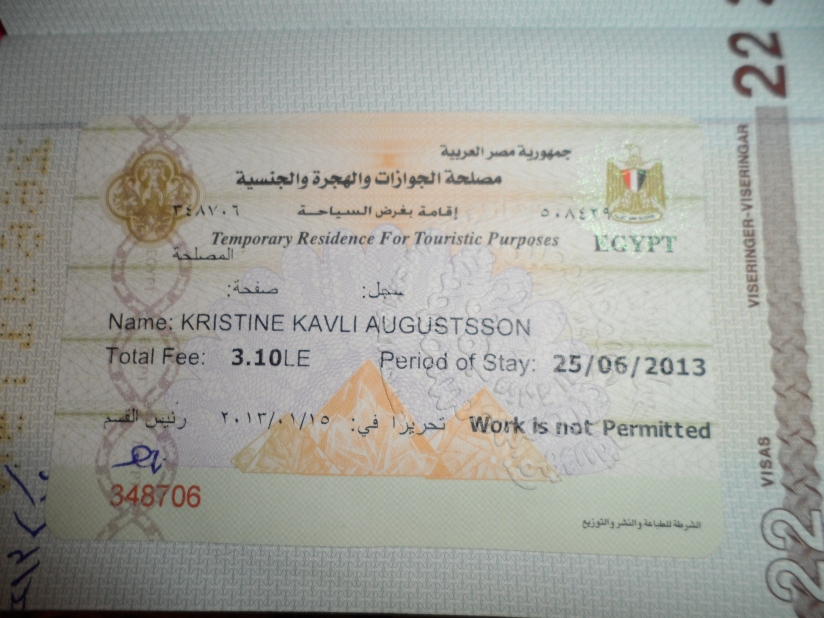 I can tell you that if you don’t know someone who knows someone, then  DO NOT GO! People behaved liked animals in the visa queues… Fighting, shouting, crying and even spitting…

The visa I got is a tourist visa that lasts for 6 months. I paid 3 pounds for it. A tourist visa at the airport is 95 pounds… Hmmm where is the common sense there?

I guess when ive managed to change the name of the apartment I have to go back to get a residence visa… So Mogamma, I will be back with a gas mask and a furious tiger…

AAAH EGYPT….. I love you but why can’t you make it a little easier….